I've spent the last few days of my summer vacation skirting raw fleeces and listing the nicest ones in my etsy shop.

I'm finally carving a path in the shed where there was a wool explosion! 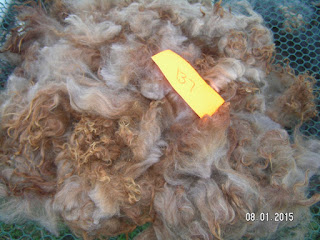 "Lucy," who was known as "Rosie" when she lived here at the farm, was one of those rare bottle lambs that I cried over when she went to her new home. She was very special and I had decided to just keep her as a breeding ewe when I received and email from a Mom looking for a show lamb/pet for her son. Hunter desperately wanted a pet lamb, not a dog, a lamb. Well, I couldn't say, "No."

It was a sad/happy day when Rosie left us to become Lucy.


On a Friday morning in July, Mom and I showed up early at the Isanti County Fair to reconnect with Lucy. She had turned into quite a beauty, as I knew she would. 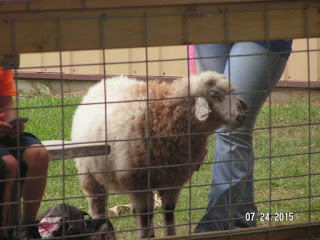 Lucy waiting her turn in the show pen

Mom and I sat through the ewe lamb, yearling ewe, wether ewe, wether and market lamb competitions dominated by hampfolk for suffshire sheep with no wool on them (and no tails). The largest lamb won each competition. Then came showmanship with Cloverbud Lamb Lead last. Finally, Rosie, aka, Lucy, entered the ring (turn down your volume).

Lucy has a great home with Hunter. She will come to visit this fall for shearing and perhaps a romantic encounter with Granite. It was great to see how happy and healthy she is at her new home.
Posted by Unknown at 5:53 AM 2 comments:

Water stopped running last Sunday evening. I shut the valve off in the house and thanks to a huge storage tank in the basement, the house still has some water trickling from the faucets--enough to make coffee in the morning.

The sheep, however, have been scrounging for water. We had a bit of rain one evening and I collected water running off the roofs of the shed and the house for them.  Friday, the last of that water was given to the ewes with lambs in the barn leaving the sheep outside of the barn without water. Feeling very sorry for them, I opened up the pen and let them out into the pasture after dark last night. They ran directly to the swamp and drank for about 10 minutes. Thankfully, Kit and I had very little difficulty running them into the pen again and locking them up.

This morning, after 8, help came in the form of a green truck with three 50 gallon barrels of water--Dad, of course.  We watered all the sheep and they drank their fill. Even have some water left over that will hopefully last a few days. It's been a year and a half battling unreliable water at the farm. We've been without water at least six times--in November, it was a month without water (luckily lots of rain kept the sheep watered). Now, its been a week with no water.

I met with a well driller today who provided an estimate for a new well. We talked about where to put the well, when he could start and how soon I would have water. He plans to start drilling this week and assures me that the water will be flowing by the end of the week--if all goes well.

Posted by Unknown at 9:24 AM No comments:

Great Weather for Shearing but Doesn't Bode Well for Lambing

Warm and sunny this morning. Unseasonably warm. Up in the 50s today. Great weather to shear the sheep in. Today, 35 sheep were shorn at the farm which included three visitors to be shorn.

Unfortunately, I'm worried about lambing in this warm weather. The sheared ewes won't feel inclined to come into the barn to lamb. Could have quite a few cold lambs if I don't keep a close watch on things.

Just a few fleeces that need to be skirted: 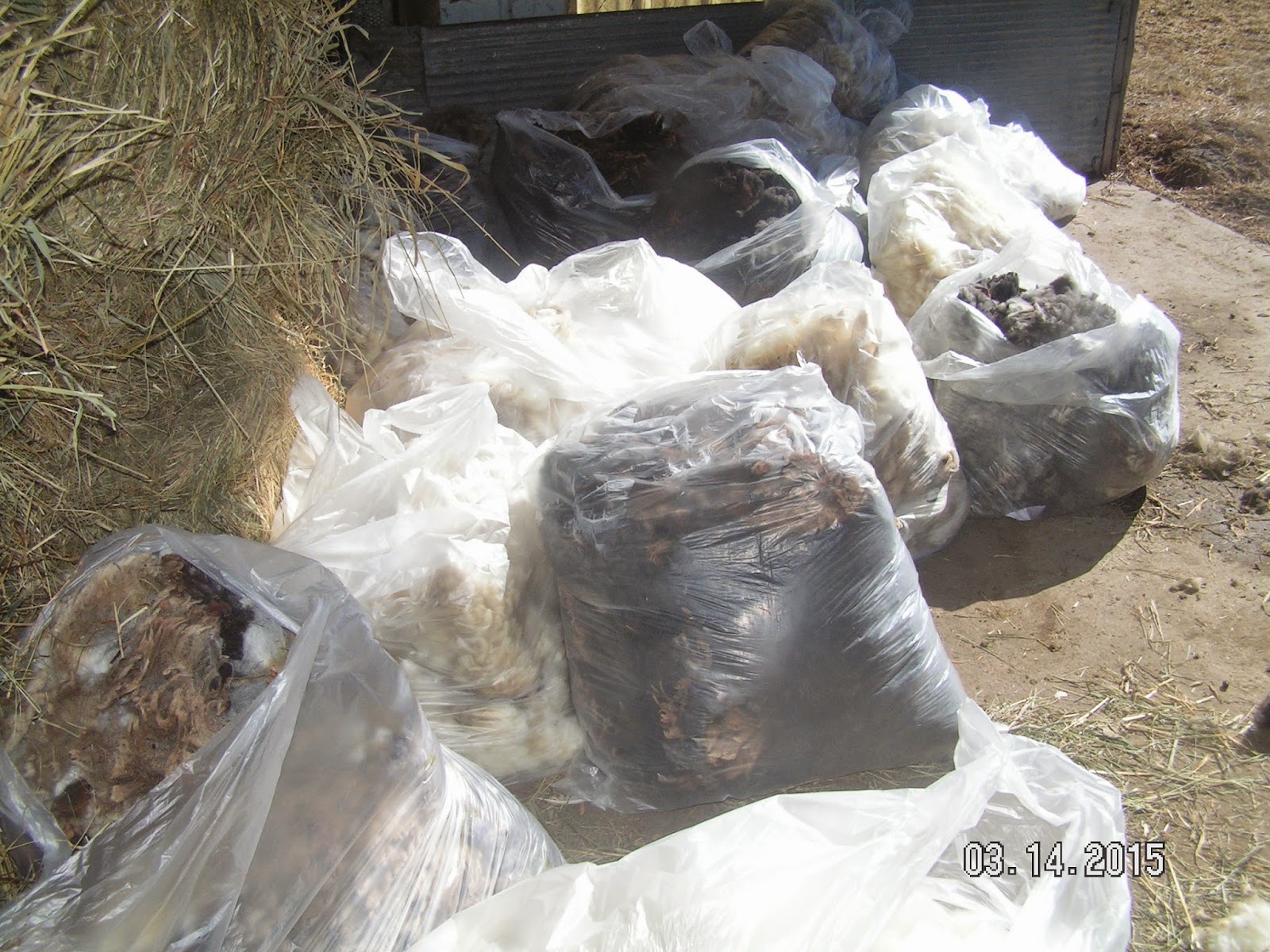 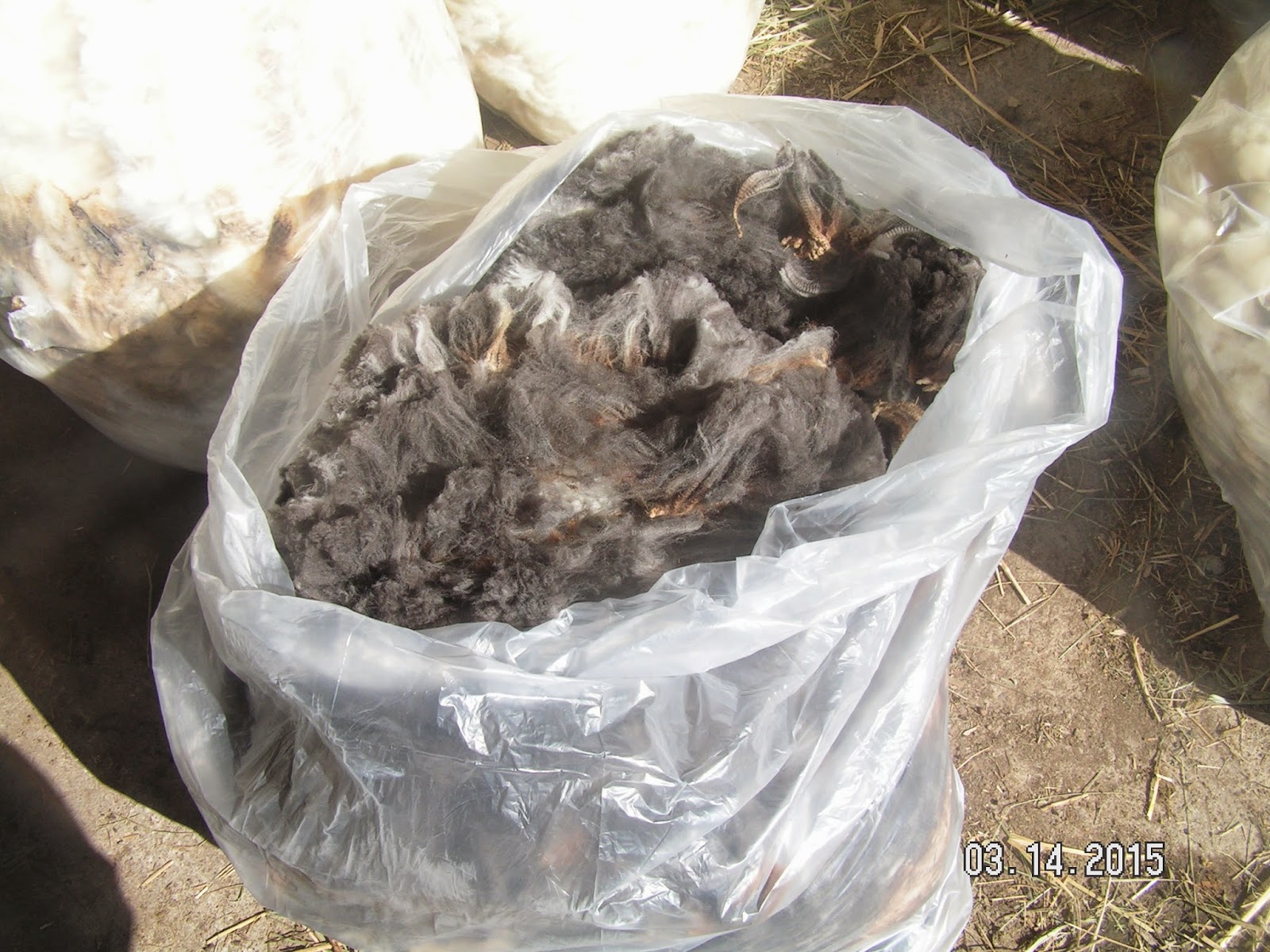 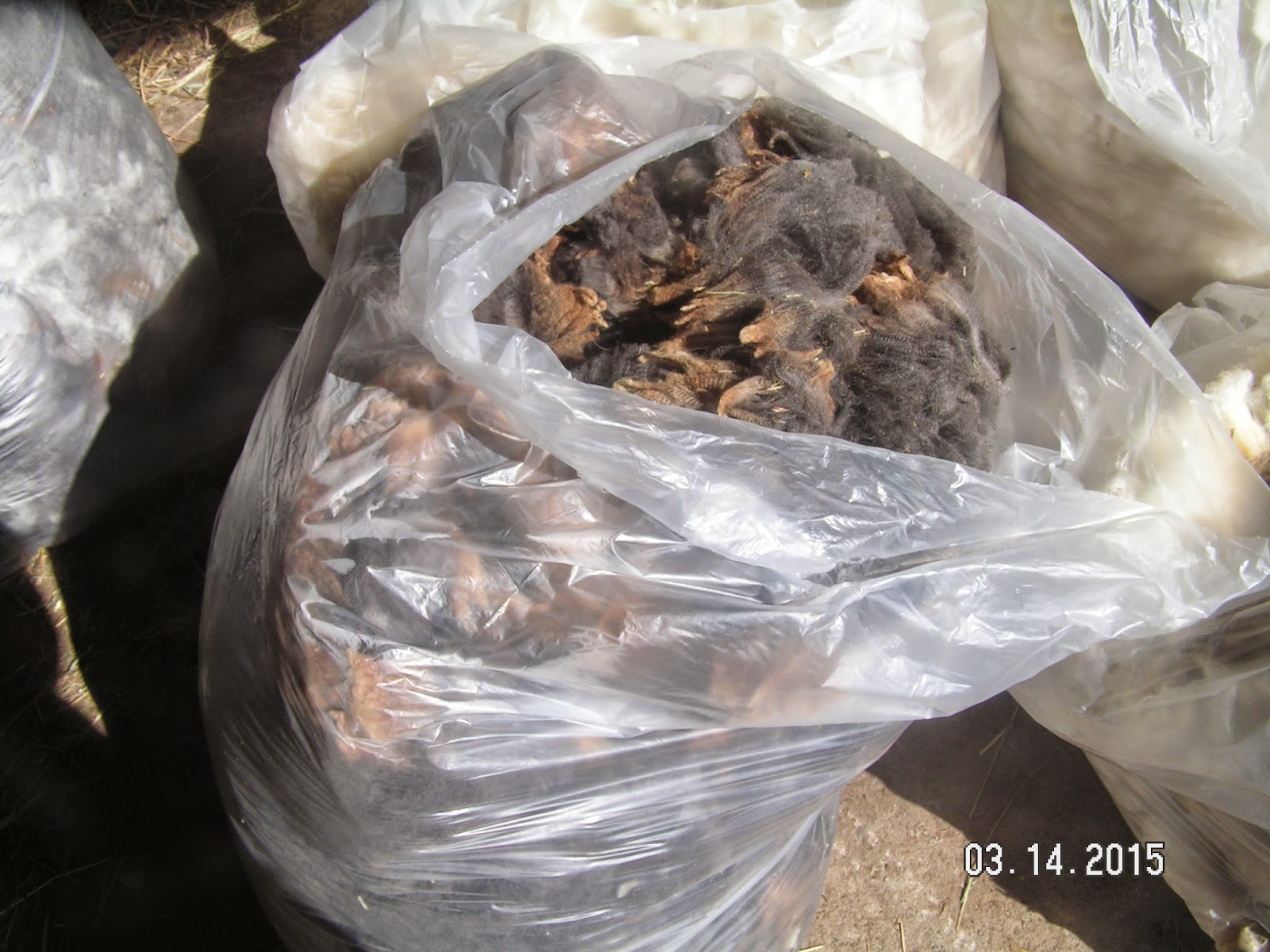 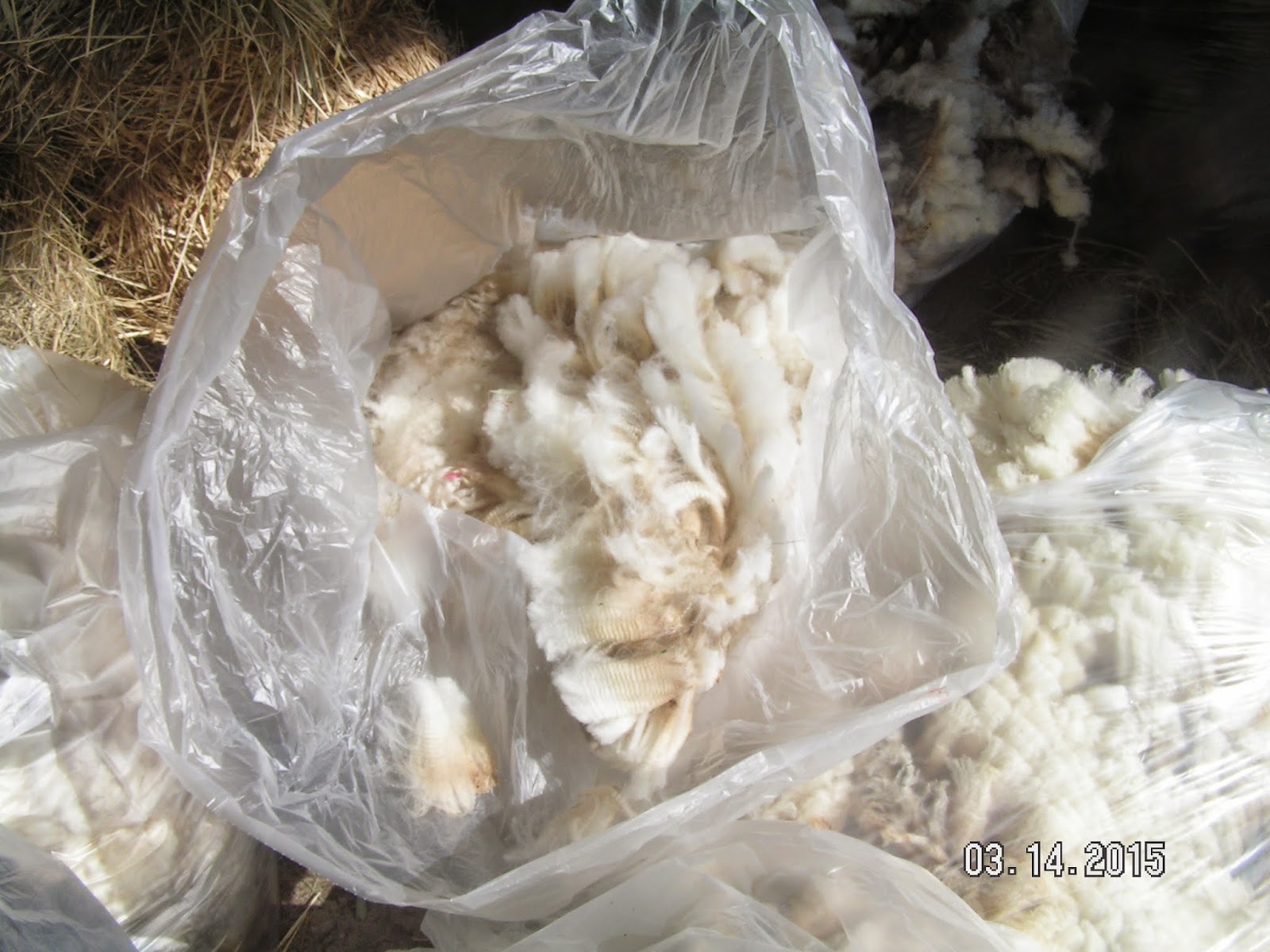 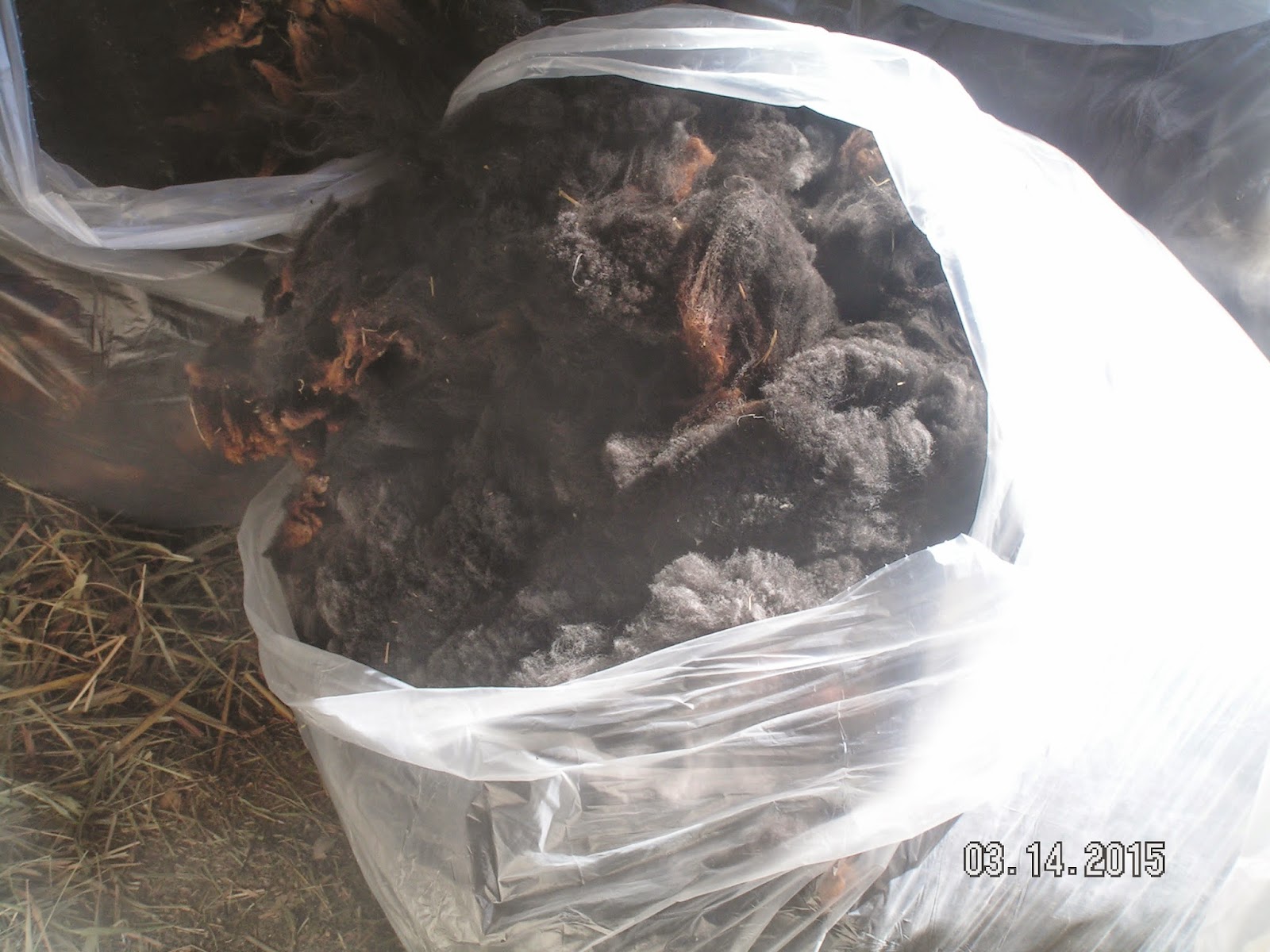 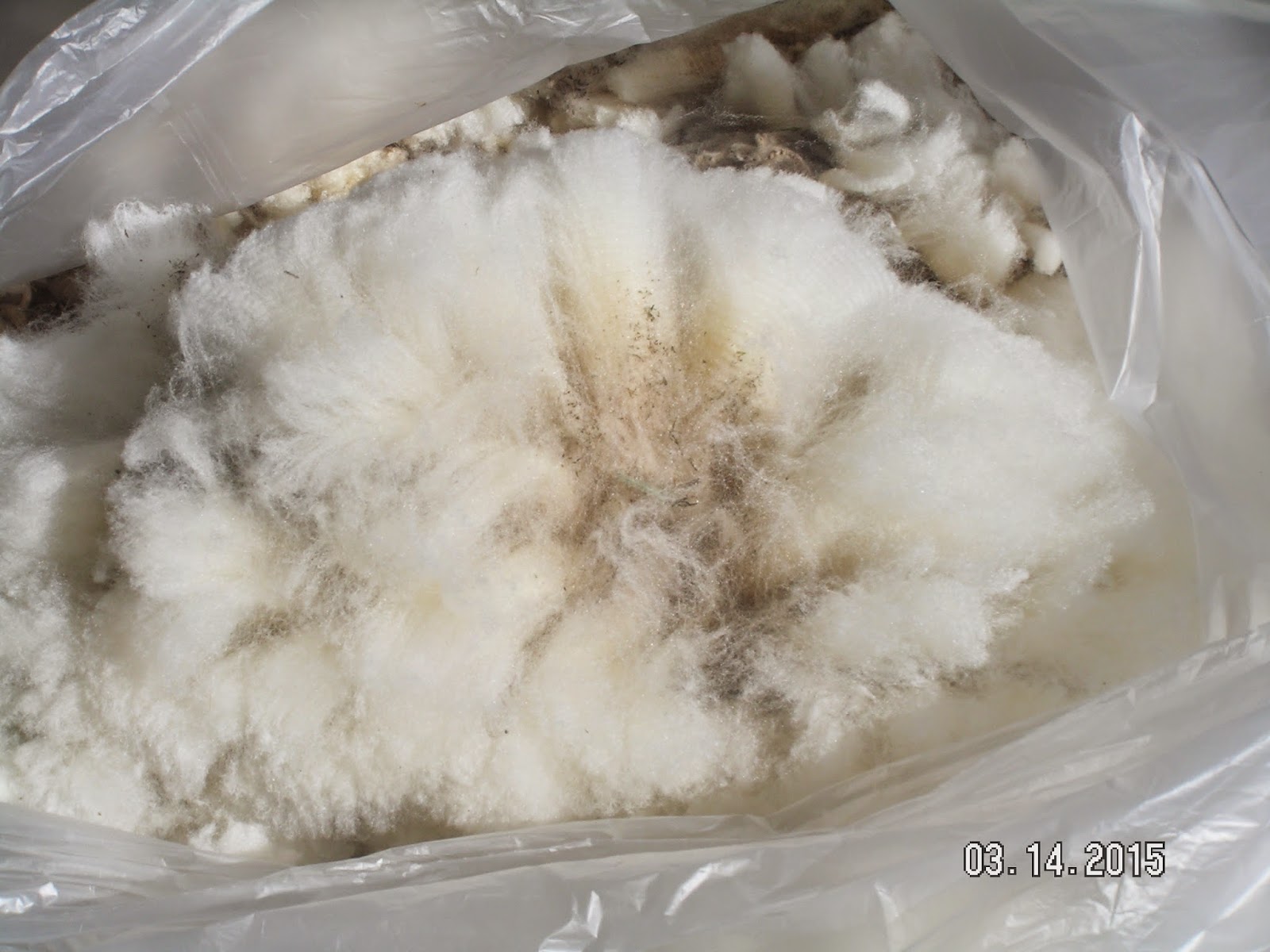 It's a good day to dye

The current outside temp is about 1F with a windchill of -11F. This seems like a very good reason to stay in the house and dye. The kitchen will warm up nicely (and get messier), and some much needed moisture will be added to the house air.

And, its time to start thinking about what to card come spring.  Planning on lots of colors and blends and many dyed karakul rovings to be ready in time for Shepherds Harvest Sheep and Wool Festival.

Although its Sunday, my usual day to put out enough hay for the week, I'll put that off 'til tomorrow when the prognosticators are predicting a heat wave temp of 20F. But don't worry, I'll throw out a few bales later today to tide the wenches over 'til then. 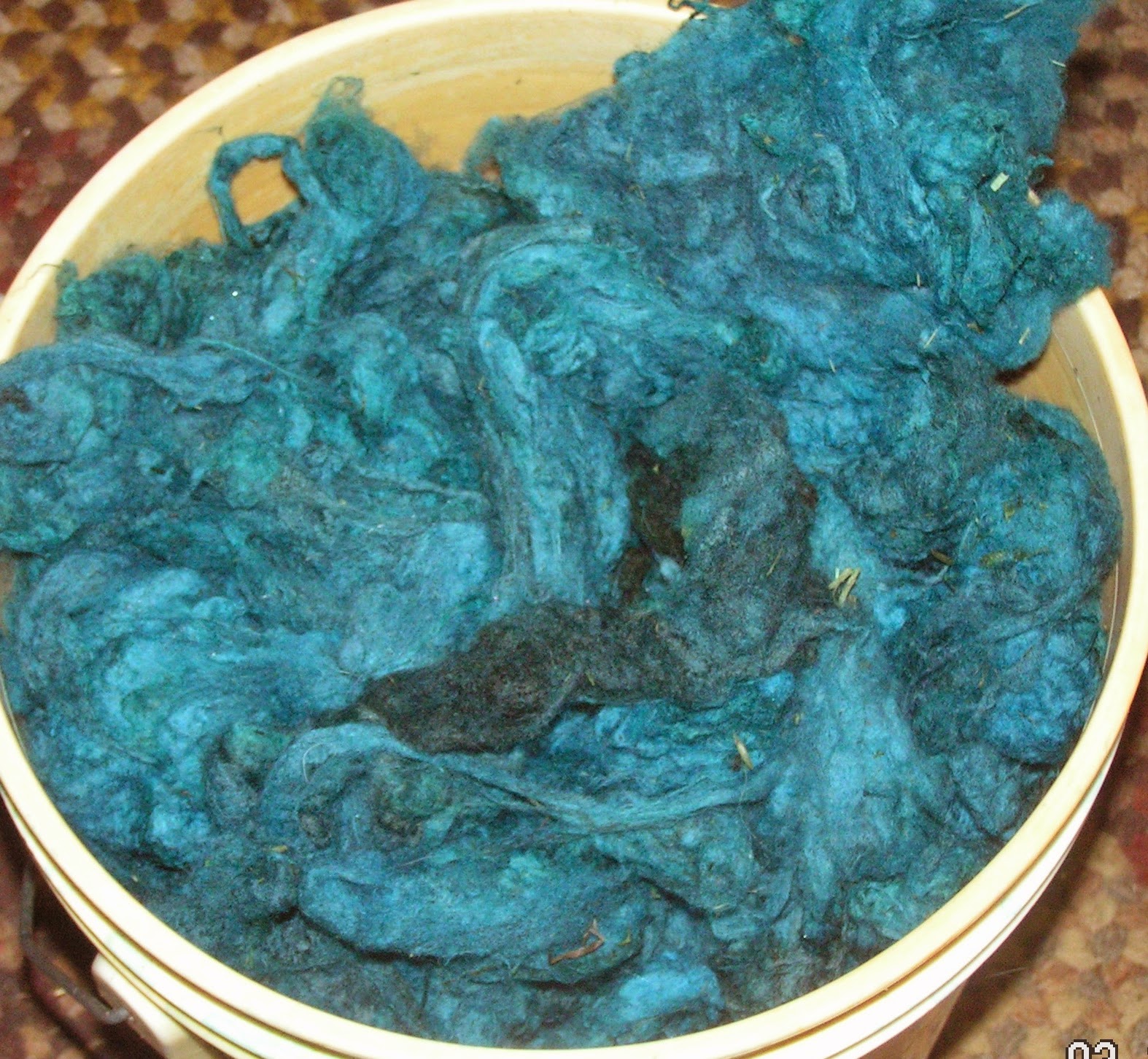 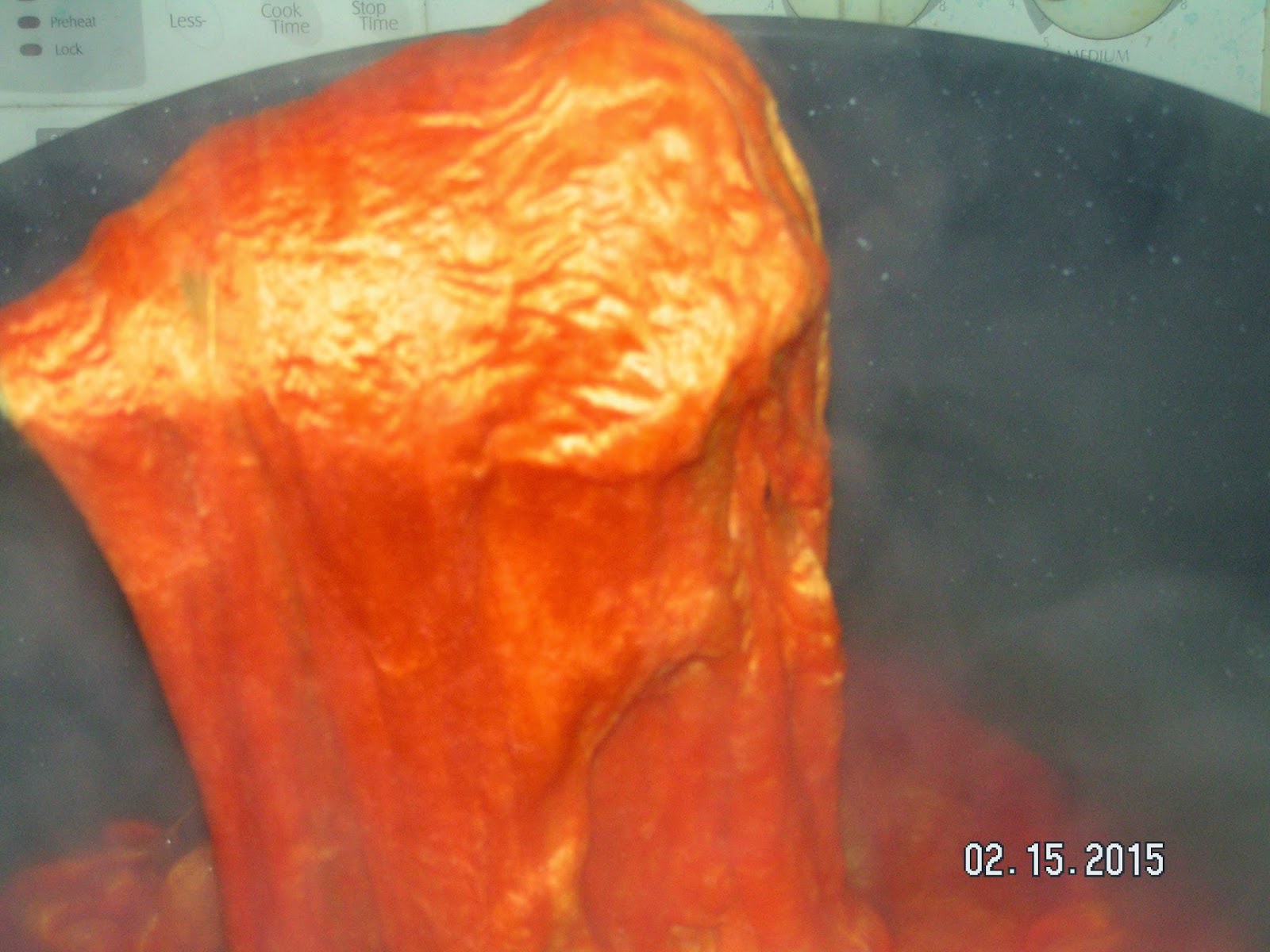 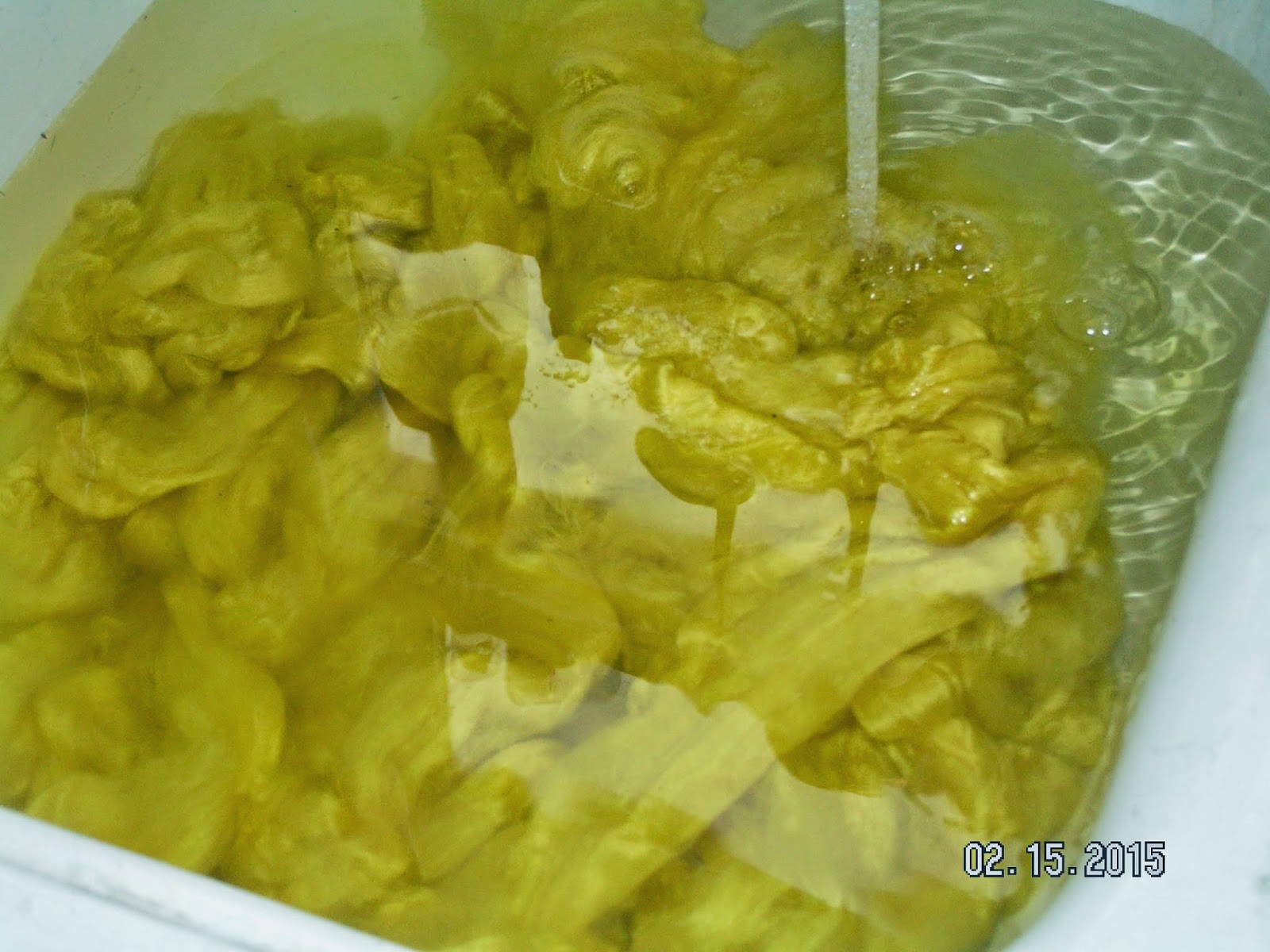 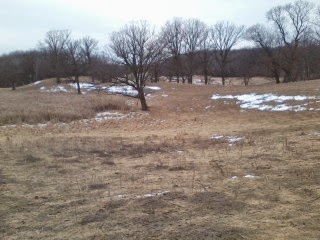 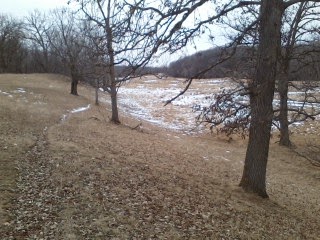 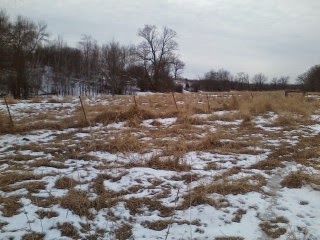 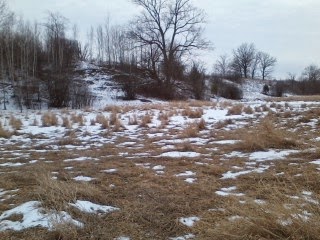 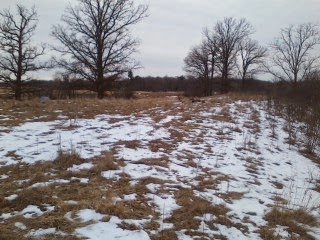 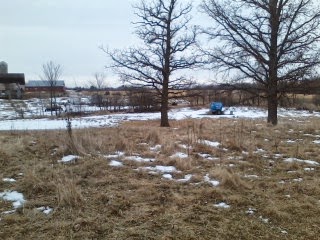 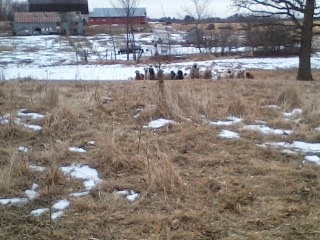 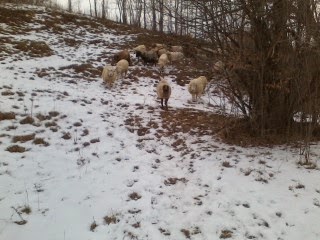 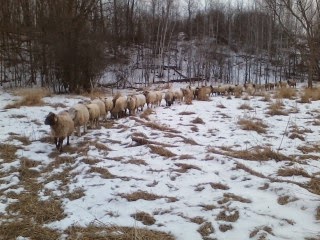 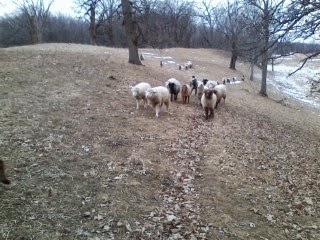 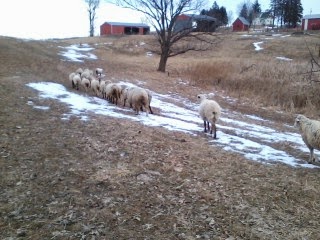 After a long, snow-filled, and bone-chillingly cold winter, spring appears to be here.  Twenty-seven lambs are on the ground and running races across the ridge in the pasture.

Yesterday, I dusted off the carder after and awoke it from its winter hibernation.  With a little oil and a bit of persuasion, the card ran beautifully.  We, the card and I, processed about 70 pounds of dyed, luxury blend rovings--wool blended with silk, soysilk, bamboo, and/or nylon.  And a dash of angelina in a few.

Here are a few videos:

The pink blend turning into roving 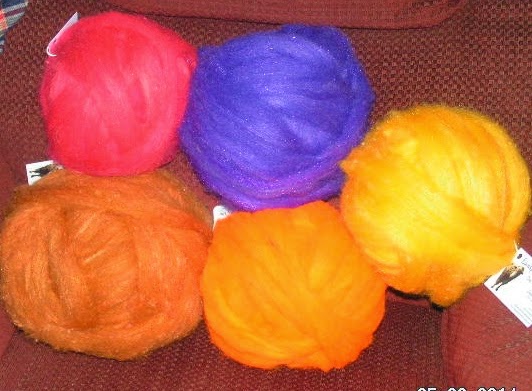 The end product after winding into 4 ounce balls

Posted by Unknown at 5:14 AM No comments: