Its been awhile since I posted but we've been busy working on the card.

Last week, I spent a day cleaning the grease off of the front of the card and discovered it is painted green! Also, found a date, "1929," stamped on the front. So, the carder was made in 1929, not 1918, as advertised. It is much younger than expected!

I tried 409 to cut the grease but it did nothing. Then I tried sudsy ammonia, that, too, was ineffective. Finally, I used gasoline. That worked well but after spending 6 hours inhaling gas fumes, I had a headache that lasted 24 hours. Ugh! The carder looks much better--well, the part I cleaned, that is. Still a lot more to clean with gas. 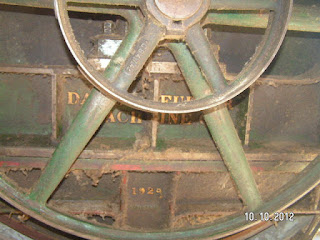 Just enough cleaned of her to show the date, "1929" and the name "Davis and Furber Machine, Co." 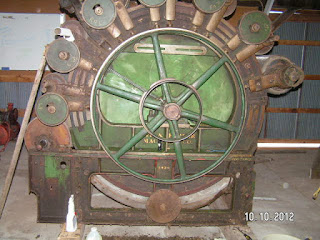 Six hours of cleaning with gasoline yielded a green machine!

Meanwhile, Dad has been working on a track system that is set up above the carder. Its to lift the rollers up and off the card and set them on a stand for easy cleaning.

Today, we tried it out and it is ingenious! Worked perfectly. We lifted four of the rollers off; I managed to clean two and a half of them. Need to get up early tomorrow morning to finish the remaining 1.5 before Dad shows up! 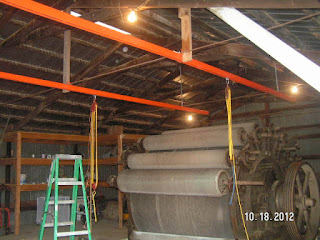 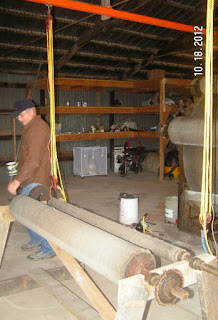 Two rollers ready to be cleaned

I was very naive in thinking that we would bring the card home, do some wiring, hose it off a bit, plug it in and be in business! However, my initial goal of having it up, running, and in business by May, 2013 is still in place. But it may take a month or two before the initial start up and practicing with the wool I bought begins.

Oh, well, it gives me something to look forward to on the days I'm not subbing.

Today was very exciting. I spent a few (felt like several) hours cleaning the card with a slicker brush and a linoleum knife! Woo-hoo!

I didn't finish--there is at least a month of work to get all the rollers and cylinders clean. Years of dust and dirt and accumulated wool are caked into the teeth of the card. Its dirty and dusty work.

Posted by Unknown at 5:11 PM No comments: