I could lie and say we'd been hard at work all day in the cold but we weren't. Instead, I spent my Sunday morning, as many Sunday mornings, watching and listening to the political pundits analyze the week. It goes in one ear and out the other but makes for quality knitting time.

I spent a bit of time feeding the sheep and talking to them, giving some cookies and scratching ears.

Later, Dad showed up about 4 to "sit around the fire and drink beer."  It was awful windy up here on the hill so we started a fire in the kerosene heater, put a pot of chili on top and drank some beer. Two bowls of chili (each) later and a few beers and we were done for the night. Tomorrow is another day to get some work done. 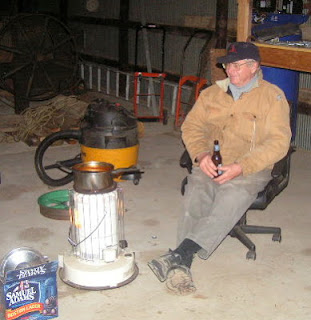 It wasn't a wasted week. We took the vacuum off and shined it up a bit. That's the two pipes running across the upper part of the carder. The mechanism between can be hooked to a vacuum source and helps to clean the main cylinder. It rides side to side on the two pipes. 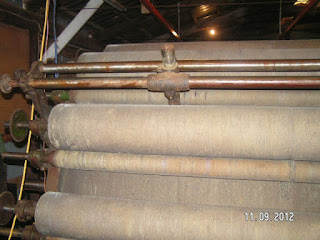 We set the main card down on the concrete by removing the skids under it. We did this a little bit on each side at a time so as not to twist the card. 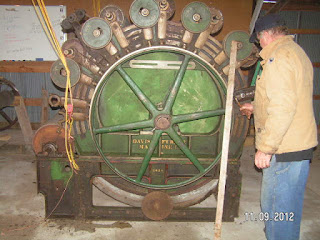 I'm a little afraid to clean much more. It seems like when the grease and dust are removed, we find cracks in the hubs of pulleys or worn parts or missing woodruff keys--more and more that needs to be fixed, welded, shimmed, or replaced. This week it was a 16" pulley that had a crack in the hub and was worn so that it was too big for the shaft. Had it welded and then a machinist put a shim in the hub so it will fit the shaft perfectly. Now we need to smooth out the shaft a bit. Also need to replace a 3 7/16 bushing! Not a cheap item but fairly easy to find on ebay.

Still planning to have it up and running by spring. 8-)
Posted by Unknown at 4:06 PM No comments: