While the farm fields are rented out for crops, Dad and I still hay the wild grass. Each spring we burn off the old grass to make for a better hay crop. Last night we burned. 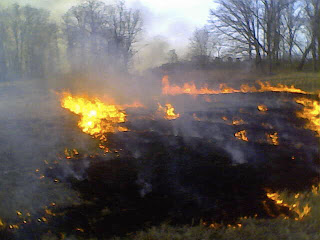 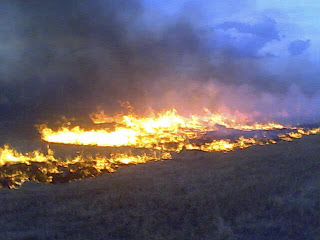 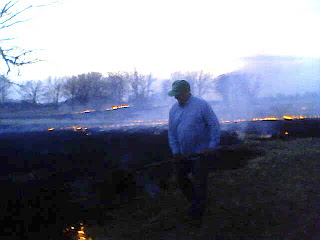 Wow! Today the carder turned under its own power! Very exciting!

We did some rewiring and then turned on the converter; turned on the carder and watched her slowly start to turn; faster and faster she turned until she got up to full speed. And then the clanking of a bad bearing and we shut her down. She slowly came to a stop. Not a machine that you want to get caught in. She will not shut down immediately. And, yes, she is a she. The bearing is nothing to worry about. Its not on an important part so nothing is broken. Just a little noisy for now.

Still a lot of work to do. The workers were not yet "chained" up so we did not get to see them turn but the strippers moved very nicely along with the breast (the front portion), the main drum and the fancy.

We worked on putting the chain on the workers and the doffers later adding the three idler pulleys. It took about 25 feet of chain for this portion of the machine. We then tried to find a leather drive belt to fit but could not find one the right length. We will have to make one.

Before the end of the day, we ran the machine one last time. Still without the workers and doffer running since we didn't have a belt for that portion yet.

A very fulfilling day seeing the machine run under her own power!
Posted by Unknown at 3:21 PM No comments:

Got everyone situated in jugs (small pens for ewes with newborn lambs). Threw the haggy old ewe out (the lamb belonged to the yearling) and took a couple photos. All are doing well. Except the old hag who still wants the lamb (she was due to lamb three days ago). 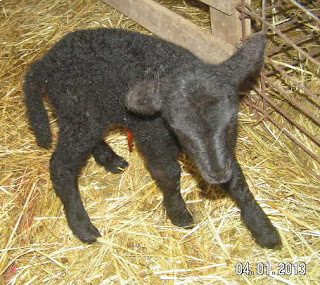 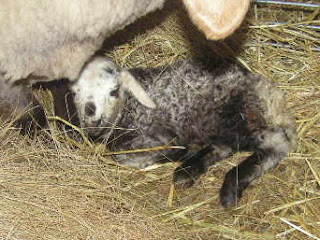 I have a baby monitor set up in the house so I can hear what is going on in the barn. One day it was the geese honking for an half hour. Another day, all I heard was the male llama fornicating. Today, all I hear is that old ewe baaaaaaaaaaaing at her would-be lamb. She's very vocal!

Posted by Unknown at 1:39 PM No comments: