I raise registered karakul sheep--a fat tailed breed believed to be the oldest known domesticated breed of sheep. Also known as persian lamb, these sheep were used to make those beautiful persian lamb coats popular some time ago.

The Karakul sheep is a type of fat-tailed sheep, very common to the African and Asian continents, but considered a rare breed in the US and Canada.

The Karakul has some unique qualities.  It has a dominant black gene, so a very high percentage of these sheep are born black.  A desert animal (originally) that stores fat in its tail for nourishment in lean times, it is very hardy and adaptable.  The pelts of the Karakul lambs are historically referred to as "Persian lamb" or "Broadtail".  This pelt is a lustrous coat of intricately patterned curls.  They were legendary trade items on the ancient Silk Road of China, and were used extensively in America (for the first part of the 1900s) as a fabric for coats, jackets, and hats.  For these reasons, the Karakul is often known as the "Fur Sheep".

The US Karakul population has drastically declined, however, and the current estimate is less than 2,000.  In light of this, the main interest of Karakul breeders has been to simply sustain the breed's presence in America.  The Registry was re-established in 1985 for that purpose.  Today, small farm flocks are scattered throughout the US, with a few in Canada as well.  The five or six known bloodlines are juggled within breeding programs to perpetuate the breed.


Additionally, the history of this breed is summarized on the same website:

The Karakul is possibly the oldest breed of domesticated sheep.  Archeological evidence indicates the existence of the Persian lambskins as early as 1400 B.C., and carvings of a distinct Karakul type have been found in ancient Babylonian temples.  Although known as the "fur sheep", the Karakul provided more than beautifully patterned silky pelts for its owner.  These sheep also were a source of milk, meat, tallow, and fiber.  The wool of the adult Karakul (a very strong fiber) was felted or spun into fabric for garments, footwear, carpets, and yurts, among other uses.

The Karakul is native to Central Asia and is named after a village called Karakul.  Karakul lies in the valley of the Amu Darja River in the former emirate of Bokhara, West Turkestan.  This region is now known as Uzbekistan.  It is one of high altitude, with scant desert vegetation and a limited water supply.  This made for a difficult life, which imparted to the breed a hardiness and an ability to thrive under adverse conditions.  This is distinctive of the modern Karakul.

Karakuls were first introduced to the United States between 1908 and 1929.  Pelt production was the goal, but very few animals were obtained.  It was of course necessary to cross them with other breeds to obtain the quantity of pelts required by the fledgling industry.  The first cross produced quality fur pelts, but there was an inadequate number of purebreds to guarantee the success of the industry.  Eventually the flocks were dispersed, and many of the original rams were lost.  The introduction of other breeds into the bloodlines has resulted in wide variations in body type and fleece characteristics.  This lack of uniformity is apparent also in the native flocks.  It is interesting, however, that the true Karakul traits that are so unique to the breed continue to persist even though other breeds have been introduced.

This has left us with a type of sheep having a rather wide definition, but it cannot be argued that the characteristics which Karakuls have in common with each other are distinctive and make them quite different from any other sheep breed found in the US today.

Here are some of my karakul sheep: 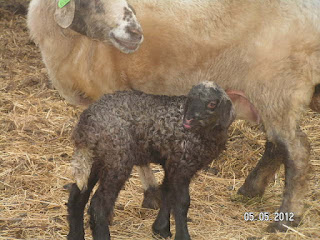 Oatmeal and her beautiful 2012 ewe lamb 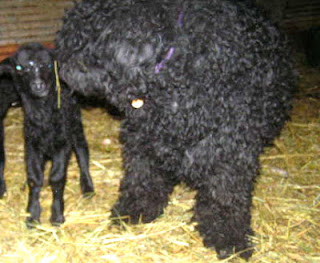 My Puli, "Newton," with a two day old lamb 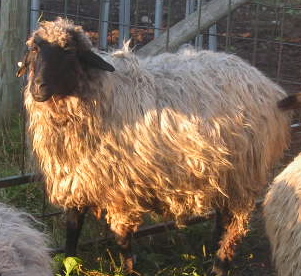 A yearling ewe lamb before her fall shearing 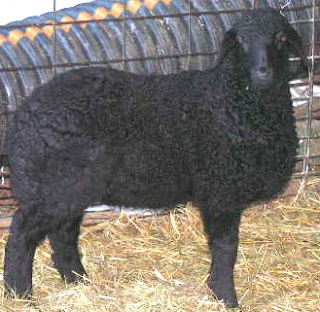 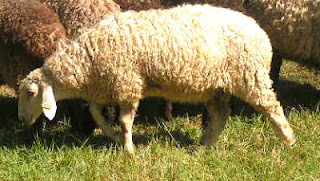 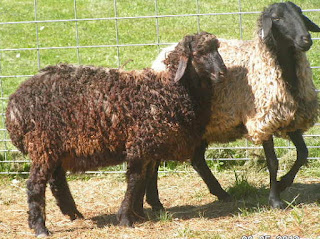